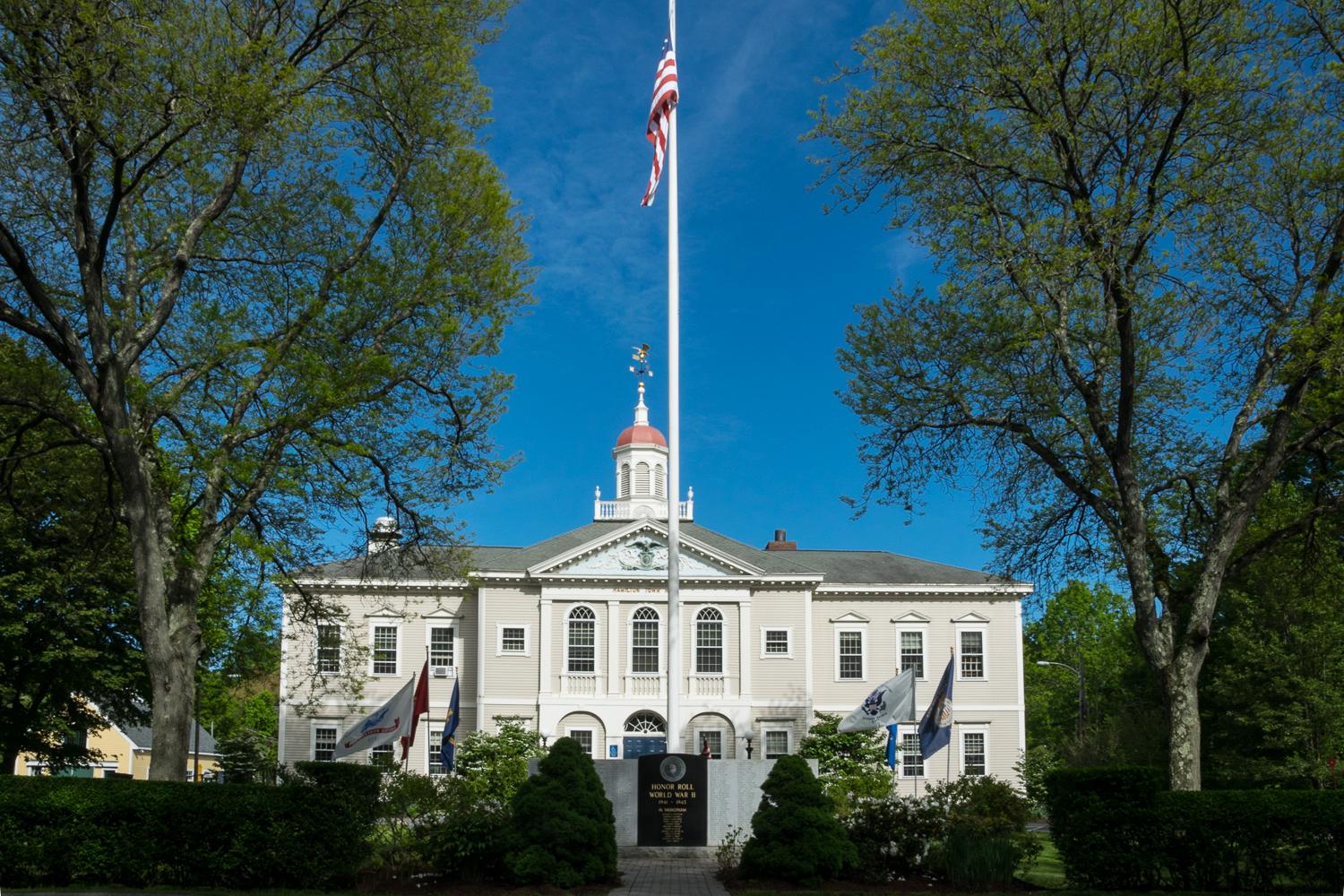 In June, 1638, John Winthrop, Jr., son of the founder of the Massachusetts Bay Colony, bought most of present-day Essex County from Masconomet, chief of the Agawam Indians, for the sum of twenty English pounds. In 1630 Masconomet had paddled out to greet the original Bay Colony ships in peace. He was eventually given six acres to plant in 1655 and about 1658 he died. A memorial stone on Sagamore Hill in southeastern Hamilton marks where he was buried with his gun and tomahawk.

Hamilton began as the southern parish of Ipswich and was known as the Hamlet. The first recorded land grant in the Hamlet was Matthew Whipple's farm, dated 1638. Three years later the new stagecoach road from Boston to Newburyport (Bay Road) was laid out through the Whipple land. Other early settlers of the Hamlet, including the Appletons, Winthrops, Lamsons, and Dodges, were attracted by countryside similar to the English farms and estates they had left behind.

The church, with a congregational form of government, formed the center of early village life. In 1712, forty families of the Hamlet petitioned the Town of Ipswich to allow them to build their own church closer to their homes. It was built on the site of the present Congregational Church, and Samuel Wigglesworth served as its pastor until 1758. Other prominent ministers who followed were Manasseh Cutler and Joseph Barlow Felt. Dr. Cutler made his influence felt beyond Hamilton in a number of ways. In particular, as a negotiator with Congress for the purchase of land in the Northwest Territory in Ohio, and for shaping the Ordinance of 1787 governing that territory to include clauses prohibiting slavery and providing for education. Dr. Cutler organized a party of forty eight villagers from the Hamlet, including his own son, to travel by covered wagon to Marietta, Ohio, to found the first permanent settlement in Ohio.

In 1793, following a court fight against Ipswich, Hamilton became incorporated as a town. Dr. Cutler spoke for the petitioners, who objected to paying high taxes to Ipswich. Dr. Cutler chose the name of Hamilton in honor of Alexander Hamilton. The town center included the Congregational meetinghouse, the town green, the cemetery (1706), a cobbler's shop (1750), and the homes of some of its prominent citizens. The post office, the tavern, the store house, and the blacksmith's shop were all added to the center in the early 1800's. With the arrival of the Boston and Maine Railroad in 1839, the population center moved gradually southward toward the depot. Depot Square became the home of the American Express Company Office (now Talbot's) which opened in 1891, and Hannah's Store (now Connolly's Pharmacy), which opened in 1898. In 1897, the new Town Hall on Bay Road was completed, enabling town meetings to be held there instead of in the church vestry.

The farm village proved to be an attractive location for Boston groups seeking land for recreation and renewal. A Methodist minister's association first held a camp meeting at Asbury Grove in 1859 because it was more accessible than Eastham on Cape Cod. During the years that followed, thousands came to Asbury Grove in the summer to hear gospel preaching, to play croquet, tennis, and baseball, and to join drama and music groups. In the 1880's, the Myopia Hunt Club, which had been named in jest for its nearsighted founders, moved from Winchester, Massachusetts to the Gibney Farm in Hamilton. Beginning as a lawn tennis and baseball club, it turned to polo, the hunt, and golf as members built large summer estates in the area. Myopia donated the site for the General George S. Patton Memorial Park to the town of Hamilton. The park continues to be a recreation center for the town today.

In 1921 the Mandell family built the Community House in memory of the eight men of both towns who died in military service during World War I, including their son, Sam. They commissioned Guy Lowell, a respected architect of Boston and New York, to design the building, and gave the Community House in trust for the use of the residents of both towns. Although in its early days the Community House offered activities such as bowling and a men's smoking room, it now features a wide range of classes and activities for all ages. On December 1, 2011, the Hamilton Board of Selectmen received a letter from Joanne Holbrook Patton in which Mrs. Patton, eloquently, yet modestly, offered to the Town of Hamilton, a gift of the Patton Homestead and surrounding 27 acres which roll down to the Ipswich River. The Patton Family Gift Advisory Committee was then formed to evaluate the Gift and on May 12, 2012, made a recommendation to Town Meeting that the Patton Gift be accepted. The vote was overwhelmingly in support. 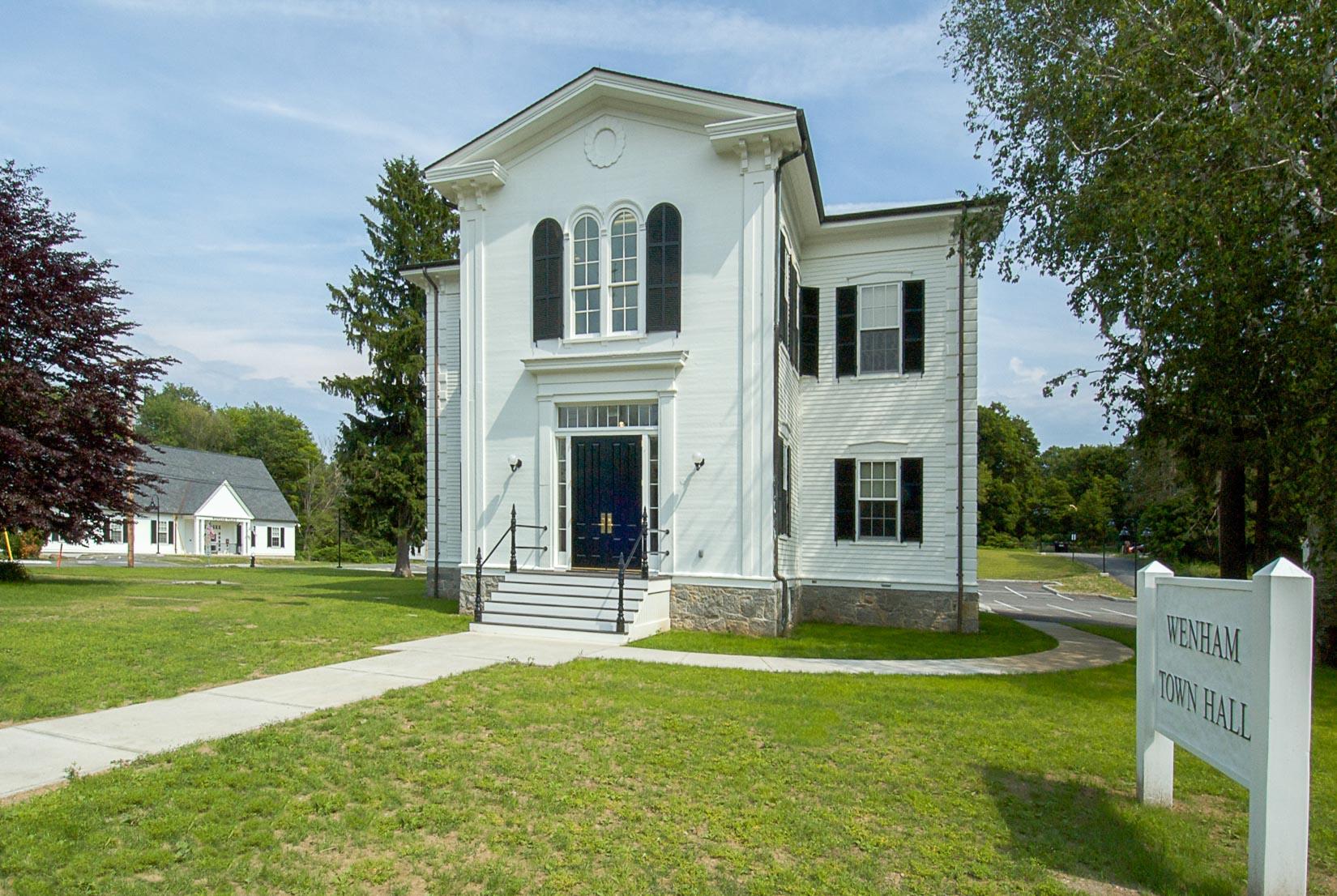 English settlers first came to Wenham in the 1630's, but the area had been home to the Algonquin tribe for hundreds of years. The Algonquin were a peaceful, agricultural group who planted and stored corn, and whose numbers had been greatly reduced by a massive epidemic, probably smallpox, in the early 1600's. Until recent years, Indian artifacts were found frequently throughout Wenham, and a representative collection is in the possession of the Wenham Museum.

Wenham was originally a part of Salem. Hugh Peters, the minister in Salem, preached to a group on a hill by the Great Pond around 1638, most probably to encourage settlement. The earliest land grants in the Wenham area roughly coincide with Peters' sermon. The hill was leveled in later years to make room for the ice industry at the Great Pond.

In September 1643, the General Court of Massachusetts granted that Wenham should be a town in its own right and send a representative to the General Court. It was the first town to be set off from Salem. Because many of its early settlers came from Suffolk County in England, it is presumed that the name of the town derives from two small villages there-- Great Wenham and Little Wenham. Wenham means "home on the moor." A church was formed in October, 1644 with John Fiske as pastor and seven families as members. In those early days, the church and government were one. A small part of the population--those who were church members-- controlled both civil and religious life. It was not until 1833 that an amendment to the Massachusetts Constitution completely separated church and town.

Wenham provided volunteers in King Phillip's War in the 1670's, and the French and Indian War in the early 1700's. In 1774, the town voted to select 15 men as minutemen, and from that time on Loyalists were not welcome in Wenham.

The Industrial Revolution, which changed the face of many Massachusetts towns in the 19th century, passed Wenham by. It remained a small community, with one notable exception. Wenham's ice industry brought the name of Wenham to the notice of people as far away as London, where hotels in the 1850's advertised: "We serve Wenham Lake Ice." Artificial refrigeration and a fire that destroyed the ice house in 1873 brought an end to this unique industry.

Although slaves were owned by Wenham residents in the 1700's, by the 1850's sentiment was fervently in favor of abolition. Between 1862 and 1865 the army camp, Camp Landers, occupied fourteen acres in Wenham. Part of this tract is now Pingree field. There were accommodations for two full regiments of Union soldiers with barracks, mess halls, and training fields.

Wenham became more accessible with the arrival of the railroad extension from Salem to Ipswich in 1839. At that time the railroad station for Hamilton and Wenham was the residence of the stationmaster. Horsecars linked Wenham to Salem beginning around 1885, and trips to Asbury Grove from Salem were especially popular. Horsecars were eventually replaced by electric trolley cars, which required relaying of tracks and the placement of overhead wires. In 1909, Henry Clay Frick, a steel magnate, bought the present-day Iron Rail property so that his daughter Helen could create a vacation home for the mill girls throughout New England. Helen Frick transferred the Iron Rail Vacation Home to the Girls' Clubs of America in 1954, and the town of Wenham bought the property in the 1970's.

Two other Wenham landmarks, the Tea House and the Wenham Museum, have their roots in the Wenham Village Improvement Society. A group of ladies organized the society in 1893 to make Wenham more beautiful by planting more shade trees. They purchased Mr. Henry Hobb's harness shop as a home for a tea house and exchange for selling ladies' handiwork, jams and jellies. The Tea House and Exchange has continued through the years as the successful fund raising arm of the Wenham Village Improvement Society.

In 1921, the Historical Committee of the Wenham Village Improvement Society encouraged the society to buy the 17th century Claflin-Richards house at the center of town. They did so, and eventually added "the Barn" (which would become Burnham Hall) and the Museum. The Wenham Historical Association and Museum became independent from the Village Improvement Society, and underwent a major renovation and expansion in 1997.

League of Women Voters ® of Hamilton-Wenham